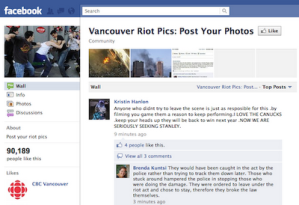 A few journalists have entertained the possibility that, instead of fearing public shaming via social media, the desire for a few seconds of Internet fame may have motivated some revelers to riot. As Margaret Wente wrote in her column last week,

Mark Leiren-Young, a writer for The Tyee, has a different view. He thinks this riot was a new phenomenon, one in which the presence of the social media actually egged on the rioters. After all, if you can’t be famous on TV, then at least you can be famous on Twitter and Facebook, even at the cost of possible arrest.

It’s a long shot, but it’s possible that social media (or the desire for social media notoriety) encouraged some rioters to believe that smashing windows, burning cars, etc. would translate into online fame.  None of the news outlets I’ve been following have suggested that social media facilitated the planning of the riots.

The story thus far does not fit the “digital media are empowering people to overcome legal constraints.”

What has emerged instead is a story about digital media as instruments of control. But with a twist ending.

The Vancouver police have had no trouble enlisting citizens in the identification of rioters on the police department’s Facebook page. The department did well to update the page fairly quickly with a thread devoted to citizens photos of the rioters. However, the police quickly realized (as have some legal scholars) that the feeling of empowerment associated with social media combined with the demonization of the rioters in the national news media created the perfect conditions for online vigilantism.

The Vancouver Police Facebook page seems unable to contain vigilante energy within official channels. That energy has instead spilled over into peer-to-peer policing — the use of social media by individuals to act out a fantasy of perfect justice where the wrongdoers (and only the wrongdoers) get exactly what they deserve.

One of the most viewed news stories on the CBC website today is a commentary by lawyer Daniel Henry on social media as an instrument of law enforcement in the Vancouver riot aftermath. Henry points out that there is a significant difference between labeling someone in a post as “criminal” and describing an act with other, broader, more subjective adjectives; the person being accused of a crime can in turn sue for defamation if the photos, videos or other evidence do not support the poster’s accusations.

Henry points out that “It’s easy to get caught up in the frenzy of getting the bad guys.” In my view, this shift from a concern about riots to a concern about “outing” the riots is where the story gets interesting. The “mob” mentality which Henry and other commentators worry about is online, not in the streets.

But for such commentators, social media have no impact on the communication of what we might call “shame messaging.” Social media are a neutral tool which convey sentiments but which do not provoke or shape those sentiments and their communication.

It’s time to consider another possibility. The bigger picture in this case might be that social media, especially their photo-sharing capabilities, provide users with a seemingly immediate, direct and appropriate response to this particular public threat. In other words, users do not participate in this kind of photo-shaming simply to help the legal system do its job. There is much less deference toward the law among the photo-sharers than police might have expected. Photo-sharing allows alleged rioters to be punished right now. The “swift justice” of online shaming is possible precisely because it is able to operate outside of the legal process. Among the problems raised by the “outing” of rioter online is that social media favours speed over all other considerations, including proportionality in its administration of justice.

Why do people use social media to “out” other people — and why do they do it with such gusto?

It’s plausible that social media vigilantism is the predictable response of an enraged public accustomed to Facebook and Twitter as a mode of self-expression and engagement with public issues. But it’s also important to consider the possibility there is more to this flurry of accusatory photo-sharing than a sense of civic duty.

Sarah Kember, in her 1998 book, Virtual Anxiety, draws on a long line of theorists who have attempted to explain the cultural obsession with photographic images and argues that photographs are highly fetishized objects, and that this the proliferation of imaging technologies in the legal system and other modes of social control is a manifestation of this fetishization of photographs as truth. Photographs are often treated as “tokens” or “trophies” of those whom they depict. In the case of individuals or groups who are regarded as threats to social order, photographic images can give the photographer and the viewer the sense that they know truth of the photographic subject (e.g., isolating and naming the individual in the crowd) which in turn provides a sense of control over the threatening person or group.

From a legal perspective, the use of images of the rioters on Facebook, blogs and other social media should be supported in so far as users are “facilitating justice,” as Daniel Henry puts  it, “not working on substitute remedies.” But the point Kember is making is that photographs often perform a “substitute remedy” because the act of photographing is bound up with a desire to control the subject depicted. Photography renders the fleeting (and in this case, fleeing) subject in a form that seems durable, discrete, and fixed. The threat is reduced at least temporarily because the threatening person becomes an object which cannot look back at the viewer.

The problem, as Kember points out, is that “Fetishism is always an inadequate and unstable means of control precisely because it is a compensatory mechanism” (p. 6). In other words, the more the act of photographing and displaying photographic images is invested with an almost magical ability to capture, punish and restore order (what Henry calls “substitute remedies”), the more that those images become reminders of what is actually lost. Henry, for instance, sees a very real possibility that the vigilante “frenzy” will further undermine “civilized democracy.”

In this way the technologies of control — in this case social media and digital images — can become intertwined with the threats which they are supposed to contain and neutralize. Digital cameras and social media — the new post-riot gear — are thus imagined to be as much of a threat to law and order as the riot itself.